In my last post, I wrote about commuting to the city from my partner’s home in Peekskill to do a day of in-house work.

This week my partner, Bowen, and I begin another commute. On Mondays we’ll come into the city from Peekskill to stay in my studio apartment in Manhattan so he can catch the subway to his campus in the Bronx to teach his Tuesday and Thursday 9 a.m. classes rather than fighting through rush hour on the Taconic. On Friday mornings, we’ll go back to Peekskill so we can be with his teenage daughters, he can help them with math homework, and we can all enjoy movies-on-demand together. Sunday morning we attend a nearby Quaker Meeting for Worship and get ourselves organized to come back into Manhattan again.

Bowen is a professor of computer science, a math kind of guy, and a high-level programmer. He’s got a mind that’s really different from my own. He’s all abstract and super-rational and mostly oblivious to his surroundings. (A touch of the Laputan there, for you Jonathan Swift fans.) I’m off-the-charts intuitive, highly visual, and often too deeply connected to my surroundings.

I’ve lived in my studio apartment in Manhattan since 1973. It’s at the top of five flights of stairs and has two north-facing windows. When I took it, I thought, ‘It’s dark and small, but I’ll only be a here a year or two.’ What I didn’t factor into my figuring was that the apartment is rent-stabilized (meaning the rent can only be raised by a small percentage each year). As the years went by and unstabilized rents rose much more steeply than my freelance wages did, the apartment became more and more precious.

Then three years ago, Bowen and I became a couple. He worked at IBM-Watson in Westchester County at the time, and that’s when I began living in his apartment and mine. A year ago, after he retired from IBM, he bought the one-bedroom co-op in Peekskill, and while my studio in Manhattan is my legal residence, I’ve gotten used to spending more and more time in the suburbs.

The view is better. Life is slower and easier (as long as you have a car). The Hudson River is a little under a two-mile walk from our front door. We have a balcony where we breakfasted in the summer and I grew flowers for the first time in my life. I’ve sunk into our life in Westchester seamlessly. And I’ve been musing on what it means that I haven’t missed any of the stuff in my Manhattan apartment. 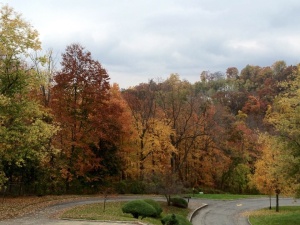 I’m thinking what it means, as we begin spending more time here than we do in Peekskill, is that a great deal of that stuff is about to head to the thrift stores and the trash! A new method of de-cluttering? Move away for several months and see what you miss.

But what I’m also musing on is this: Where do I live? Do I have a home? For decades I was centered in my studio, my artist’s garret. I felt a great sense of accomplishment at having created a happy, independent life for myself, running my freelance proofreading business, enjoying the city, and delighting in Central Park and the birding community I discovered there.

Now, this garret, this center of my solitary life, is becoming our weekday pied-a-terre. How much energy will it take to make it ours instead of mine? What has become of my solitude? Was it something I truly needed? Or was it something I found a way to make a life with from necessity?

Last week, I did a day of proofreading in-house at UNICEF. I took the 9:26 train from Peekskill. The day was warm for January and bright, and I stood on the platform looking west across the Hudson River to Bear Mountain. The tracks run  beside the river from Albany to Manhattan, and the riverbank twists and curves so much at Peekskill that I can see my train coming down from Poughkeepsie several minutes before it gets to the station. It’s a wonderful way to start a day of work, waiting on the banks of the Hudson, watching the gulls, keeping an eye out for the eagles that nest nearby.

After a day scrutinizing text, graphs, and tables related to funding meant to help children get through natural disasters and armed conflicts around the world, I raced from UNICEF to Grand Central with the hope of catching the 5:13. (The next train didn’t leave for Peekskill for a full 20 minutes! Imagine that.) West on 44th Street to Lexington, running to make the ‘Walk’ lights at Second and Third  Avenues so I wouldn’t have to stop on the sidewalk and give cars the right of way, into the darkish corridor beside the Graybar Building, flashing a glance at the Train Departures board to note that the 5:13 was at Gate 35 on the farthest corner of the station, then out of the passage into the wonderful open space of the station itself with its sky-blue ceiling high overhead marked with the constellations of the stars, its terrazzo floors, its famous clock anchoring the center of the space, and people everywhere running in all directions to make their evening trains. (You remember that scene in Broadcast News where Holly Hunter races to deliver the video? Multiply that by hundreds to get a sense of Grand Central at rush hour.) 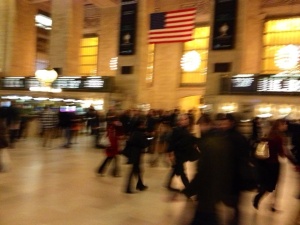 I’ve spent much of my time in Peekskill this past year, about 40 miles north of Manhattan, since my partner bought his apartment here. But I know I’m still a New Yorker when I navigate Grand Central at rush hour . . . and love it!

As I held my iPhone over my left shoulder and snapped the picture of my evening commute for this blog, I thought of the contrast with the morning’s picture. For the first time I wondered about how much energy it must take to move back and forth between these worlds, these rhythms.

What’s involved in internally shifting from contemplating the river outside the window of my moving train to running through the crowds and obstacles of the city? And what’s involved in being able to embrace both with joy and wonder?

Well, that worked! Here’s why.

I dislike the act of writing. It doesn’t feel good. After I’ve been at it a while I feel like I’m swallowing myself. You know the way the water spins around and around before it goes down the drain, usually with that schlurping, sucky sound at the last? That’s what I get to feeling like inside while I’m putting the words together on the page (or screen). The more I write, the further back into myself I go. It’s isolating. And the truth is that I have the fear I might not be able to find my way back out to the world and the air and the light again. The isolation is more than I can bear. It makes writing a book hard.

It’s also why journaling is not something that works for me, even though I admire the journals others manage to keep.

Blogging, however, has promise. Yes, I have to spend time putting the words together. But while I’m doing it I know that almost immediately–’immediately’ relative to writing that is–the words will be out in the world. Out there beyond my control and available for you to do with as you will. That feels good!

It feels good to know I have your company. It helps the isolation.

Now, along with the act of writing, I also dislike reading. It’s more than the fact that I spend my days proofreading reference works, macroeconomic reports, and textbooks. Like writing, the act of reading doesn’t feel good to me. I feel invaded, intruded upon, and manipulated. I don’t like the sense of the words going into me.

Proofreading is different. When I proofread, I’m telling the words what to do. I’m standing outside, detached, giving them orders: “Rebreak yourself!” “Align left!” “You. Switch places with that guy behind you!” “Hey! Agree with your verb!” “Pronoun. Find somebody to connect to or else . . .!” It’s a constant battle. And I confess that it feeds my sense of superiority. Superiority over a bunch of black marks on a page. Internal . . . external . . . writing . . . reading . . . journaling versus blogging.

Where did such a vexed relationship to the written word come from?

Some time ago, at the prompting of a friend, I began writing a narrative account of the strange things that have happened in my life–curious coincidences, intuitions that mattered, even instances of what could be called spectral visions. As I begin this blog, I’ve got an outline, a conclusion, a first chapter with part of a second, and a circle of  friends (veteran writers among them) urging me on.

The book is called Choosing Miracles: A Memoir of Voices, Visions, and Angels.

That’s what I’ve got.

What I don’t have in place is my own internalized identity as a writer. And I can never seem to get, find, or create the time, space, and energy to write given my work as a full-time freelance proofreader. (These, I’m sure, are related.)

Yes, of course I should make my own work my priority and turn to the moneymaking jobs after the day’s writing is done. Yes, of course I should write every day, no matter what. It doesn’t happen. My proofreader self crowds out the writer in me every time. I’ve got to get to that job on the desk so I can submit the invoice so I can pay the bills. And by the end of my day looking for typos, bad word breaks, bad base alignments, and inconsistent heads, the last thing I want to do is mess with words–even my own.

So I go to the park and look for birds. I go to the movies. I watch TV. I do things that lift my eyes off the page or out of the computer and I watch colors, shapes, and things that move. It’s wonderful!

This blog is an attempt to deal with the conflict between my work as a proofreader and my work as a writer. (There are other conflicts I’m aware of that are getting in my way, but I’ll talk about them later.) I’m beginning here. I’m creating this place where I can come and go casually, on coffee breaks or when I’m shifting from one proofreading job to another, and jot things down. Who knows what it’ll turn into?

Now it’s time to work on the quarterly macroeconomic forecast for New Jersey.